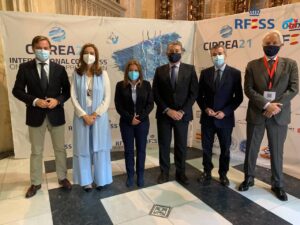 Isabel García Sanz, president of the Royal Spanish Lifesaving Federation, together with the authorities present at the inauguration of the 3rd International Congress on Drowning Prevention (CIPREA)

Vice Councillor Antonio Sanz will promote the inclusion of drowning prevention in the school curriculum.

The Royal Spanish Lifesaving president, Isabel García Sanz, declared today at the opening of the 3rd International Congress on Drowning Prevention (CIPREA) that it is “fundamental” to have a single National policy that coordinates all the entities and agents in this area. García Sanz stressed that “every minute two people die from drowning in the world“.

“Raising awareness is essential”, insisted the President, who demanded a national aquatic safety strategy based on a common legal framework for all the regions and who valued the fact that the Royal Spanish Lifesaving and Rescue Federation is the only organisation to develop a national prevention campaign, #StopAhogados, as well as explaining other initiatives of the Federation on its 60th Anniversary, such as the digitalisation of its archives.

The Vice Councillor of the Presidency, Public Administration and Interior of the Andalusian Regional Government, Antonio Sanz, said that the holding of the CIPREA in Cordoba is “a world milestone” for our region, while stressing that this congress has become “an international benchmark in aquatic and land emergencies“.

Antonio Sanz explained that the Andalusian government’s “priority” is emergency planning, promoting “a culture of resilience and coordination” between the administration, civil society, prevention technicians and volunteers.

Likewise, the Royal Spanish Lifesaving Federation and the Junta de Andalucía have agreed to incorporate lifesaving training into the Andalusian Institute of Emergencies and Public Safety (IESPA), so that its students can obtain a competent degree of learning in this area. A joint working group will also be created between the Spanish Federation and the Andalusian Digital Agency to improve the efficiency of rescues through the development of technological applications that allow a comprehensive monitoring of incidents.

The Secretary General of the International Life Saving Federation (ILS), Harald Vervaecke, presented historical aspects of a sport that was present at the Paris Olympics in 1900.

The current struggle of the ILS, which brings together 174 national entities from all over the world, is the consideration of lifesaving as an Olympic sport.

Subsequently, he has insisted that work should be done to ensure that at the 2032 Olympic Games in Brisbane (Australia), Lifesaving is included in the Olympic programme. In the Oceanic country it is “the second most followed sport, while football is the sixteenth”

The second vice-president of the Cordoba Provincial Council, Felisa Cañete, declared that the Congress “is very significant for the projection of Cordoba, and even more so after being the first to be held after the pandemic“. Cañete stressed that the solidarity that comes “very naturally” in the field of lifesaving should be applied to a society that sometimes waits to show its empathy in extreme situations such as the COVID-19 or various natural disasters, for which she gave as an example the values of empathy and dedication that permeate Lifesaving and the importance of improving the training of professionals in regional aquatic venues in order to prevent drowning.

For his part, Miguel Ángel Torrico, Councillor for the Presidency and Security of Cordoba City Council, encouraged the more than three hundred attendees to enjoy the city and the various events such as the Courtyards and Flora festivals being held this weekend in a city with World Heritage Sites such as the Mosque, the historic centre, the Courtyards Festival and the archaeological complex of Medina Azahara. 2021/10/15