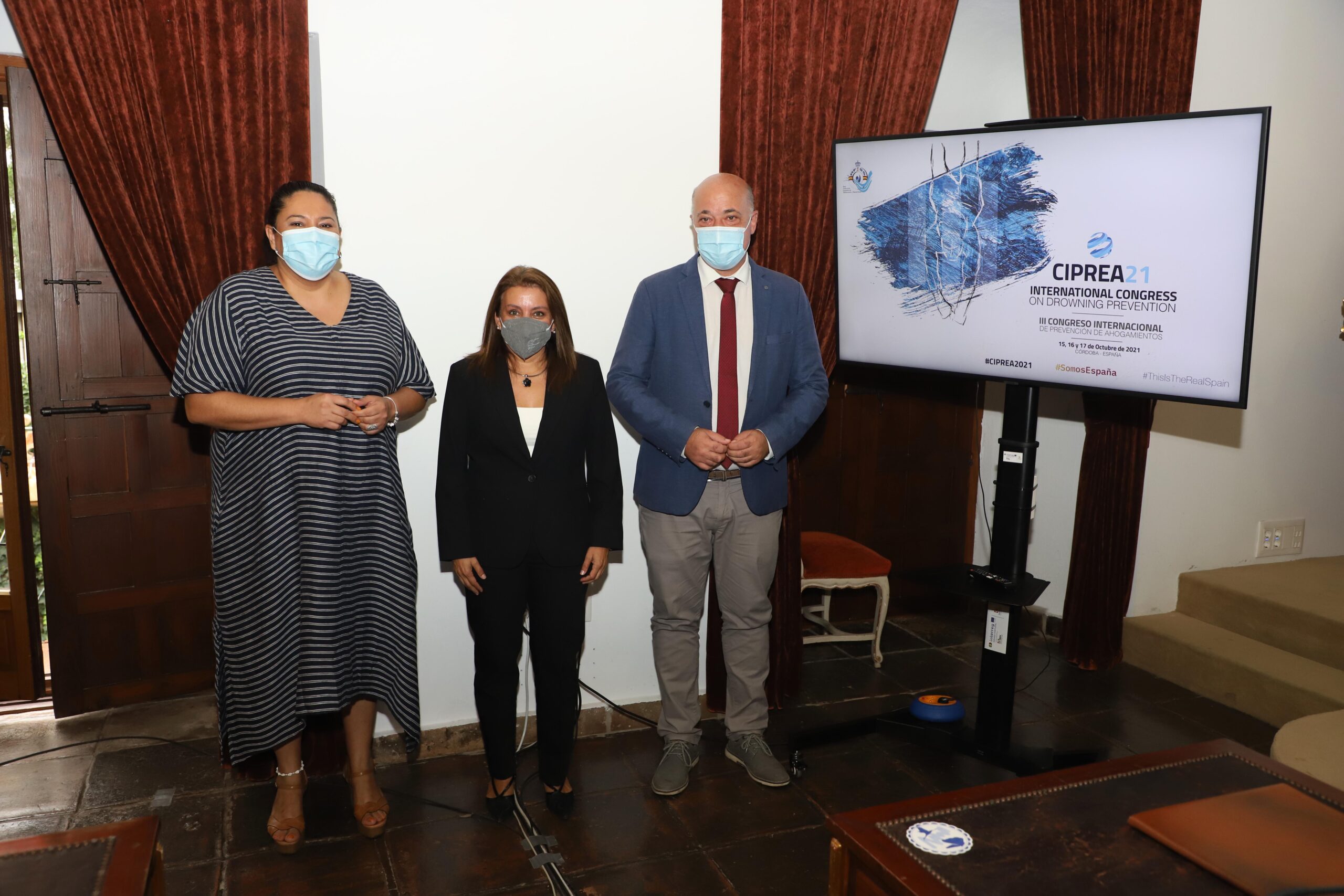 CIPREA opens up to the province of Cordoba

The meeting, which has the support of the Provincial Council, will be attended by experts from 31 countries

The Palacio de la Merced, headquarters of the Cordoba Provincial Council, today hosted the presentation of the International Congress on Drowning Prevention (CIPREA), organised by the Royal Spanish Lifesaving Federation, which will be held at the Palacio de Congresos in Cordoba on 15, 16 and 17 October.

In relation to this meeting, the President of the provincial institution, Antonio Ruiz, pointed out “the importance of hosting an event of these characteristics, as this is the first congress of international importance to be held in the province after the pandemic, as well as the first meeting on this subject to be held worldwide”.

According to Ruiz, “this proposal has many components to make it a special event, and the fact that our province has been chosen to host it will undoubtedly contribute to adding new nuances to the Cordoba brand”.

“This congress is presented to us as a forum for analysis and study of drowning in the aquatic environment and, above all, as a vindication of the importance of prevention in an area in which we are most vulnerable,” Ruiz added.

The head of the provincial institution also pointed out the importance that “the aquatic environment has been acquiring within the economic and social activity, both within the development of the tourism sector and as a sporting venue; a fact that takes lifesaving to the highest level of competition, with all the values that this entails”.

Ruiz also wanted to highlight “the praiseworthy work being carried out by the Royal Lifesaving Federation, where important work is being done to professionalise and dignify the people who in some way dedicate themselves to lifesaving and lifeguarding, actions which benefit society in general”.

For her part, the first vice-president of the Córdoba Provincial Council, Dolores Amo, highlighted “the importance of hosting and developing in our province one of the international events that will take place in 2021”.

According to Amo, “hosting this meeting will undoubtedly place Cordoba once again as a benchmark in the organisation of events, placing our province at the forefront of hosting top-level initiatives“.

“From the provincial institution, we present ourselves as an active part of this proposal, hoping, from our commitment that the Royal Spanish Lifesaving Federation achieves the objectives set for this III edition of the CIPREA”, concluded Amo.

Finally, the president of the Royal Spanish Lifesaving Federation, Isabel García, emphasised that “this is the most important conference for the sector and the edition with the greatest international presence, as it will include representatives from the 5 continents, with the participation of experts from 31 countries, of which 24 will be presenting papers and communications“.

García added that “around 300 people are expected to attend, in addition to the mobilisation of the federation’s staff, which will mean that Cordoba will receive around 400 visitors on the occasion of this 3rd CIPREA“.

“The programme planned for this meeting, of which some details have yet to be finalised due to the world situation, is made up of 8 presentations, a round table of experiences, 66 communications and 15 posters, all revolving around 9 thematic areas“, García continued.

The president of the Royal Federation also explained that the round table of experiences will be a particularly important moment, “as real testimonies will be heard during the event, with different endings”.

García added that among the parallel activities that will be organised, “the exhibition ‘A sea of commitment’ will open its doors on 14 October at the Palacio de Orive“.

“I would like to take this moment to thank the support of the Provincial Council for this initiative, a meeting that was born in 2016 in Motril, passed through Benalmádena in 2018 and that in its third edition will have a strong Cordovan accent”, García emphasised.

According to updated data from the National Drowning Report (INA), the total number of people who died from unintentional drowning in Spain between 2015 and September 2021 is 2,701; while at Andalusian level this figure reaches 400 people. This figure extrapolated to the province of Cordoba, during the same period, amounts to 18.

In terms of age, 42% of the people were over 75 years of age, while by location (capital or province), 50% of the drownings occurred in the city of Cordoba and the rest in its municipalities.

Most of the deaths occurred in private swimming pools (42.86%), although the document highlights the fact that unattended aquatic areas such as ponds and reservoirs should not be overlooked. Source: Diputación de Córdoba 2021/10/4